Biomass can be used for electricity production directly via the combustion of the raw material or indirectly by transforming this raw material into biofuels like bioethanol or biogas. Biomass energy production offers important advantages compared to fossil fuel production plants: • Its sources are renewable • It is considered zero-emission energy (the carbon dioxide produced has been previously captured by plants) • It helps to reduce solid waste accumulation • Its sources are nearly free or cheap However, biomass energy production has a major restraint that limits its expansion in the power production scenario: its efficiency in terms of kilowatts per hour (Kwh/Tm) of fuel is very low compared to fossil fuel generation or other similar sources. When we are not using directly the mass but the biogas, gas turbines are required to produce the power. The main problem is that gas turbines power output is reduced when ambient air reaches high temperatures, which usually occurs during on-peak hours. High inlet air temperatures considerably reduce the efficiency of the turbines due to the lower air density in these conditions and a fall in the air-fuel ratio. This affects the combustion efficiency and generates a drop of 30% in power production in this fraction of the day. In the same way, the inlet temperature affects biogas plants for electrical generation and co-generation, producing a reduction in the air-biogas ratio, so turbine inlet flow is lower and thus generates less power. 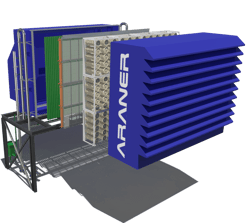 There is a solution to the difficult conditions for biomass power plants operating in regions with high ambient temperatures: the use of Turbine Inlet Air Cooling (TIAC) systems, just one of the powerful solutions provided by ARANER. TIAC plants are located before the turbine to cool down the inlet air before this stream goes inside the turbine. By reducing the inlet air temperature, air flow rate into the turbine increases. Power production increases too, producing an efficiency rise of up to 30% during on-peak hours. Furthermore, these hours usually correspond to periods with high demand, so it is crucial for biomass power plants to be able to attend to this demand. Turbine Inlet Air Cooling systems are very simple to install and operate. They require only a small amount of water to work, which can even be substituted by brine or other similar fluids. Moreover, maintenance of the equipment is very low and does not require special abilities. In addition, this technology can be combined with Thermal Energy Storage (TES) tanks, maximizing the power output and efficiency of the system.

In particular, the Middle East and North Africa (MENA) region is a paradigmatic case into evolving from fossil fuel energy production to renewable sources generation. Biomass power plants have an important impact on this evolution. MENA countries have abundant biomass energy resources, which have not yet been explored. The principal biomass source in this region comes from municipal solid waste, due to the high rate of population growth, urbanization, and economic expansion in the zone. 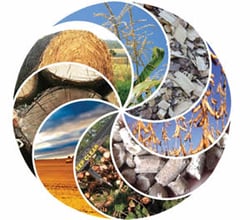 In addition, sewage sludge is another possible source whose production has been growing in the last years, presenting an increasing problem for these countries due to its high treatment costs. One possibility would be to use this as biofuel for biomass power production. Finally, the food processing industry also generates high quantities of organic residues and by-products. These can be used as a source of bioenergy or be transformed into biodiesel for posterior power generation. According to conservative estimates, the biomass energy production capacity in the MENA region is about 400TWh per year. The major biomass-producing MENA countries are Egypt, Yemen, Iraq, Syria and Jordan. Besides these countries, Bahrain, Saudi Arabia, UAE, Qatar and Kuwait rank in the top-10 worldwide in terms of solid bio-waste generation per capita. This data implicates a high potential source for biomass power production in the region. Expansion of this power source in MENA countries has been limited so far. Mostly due to high ambient temperatures in the middle of the day and during the summer months. However, new solutions like TIAC plants are boosting biomass power production. The Global Biomass Power Generation Market is expected to reach $66.2 billion by 2026, with a Compound Annual Growth Rate (CAGR) of 7.3%. Furthermore, 36% of this incremental growth will originate from EMEA (Europe, Middle East and Africa), which supposes important opportunities for investment.

Biomass-based power production is growing fast worldwide as an alternative to fossil fuel generation. In addition, it helps solve challenges derived from increasing urbanization and solid waste generation. In the MENA region, this technology is growing. However, when associated to gas turbines the performance is limited by high ambient temperatures, which affects the air flow-biofuel ratio, and thus the power plant suffers an important loss in efficiency. A good solution to avoid problems related to high inlet air temperatures is to invest in Turbine Inlet Air Cooling plants. This simple and economic system can make a huge difference in the efficiency of your biomass power plant in the medium to long term.

END_OF_DOCUMENT_TOKEN_TO_BE_REPLACED

With over 100 gas turbines cooled under its name in the Middle East alone, ...

END_OF_DOCUMENT_TOKEN_TO_BE_REPLACED

The change in power generation market over the last few years has been ...