Ambient loop system: why it is a good option for the future

BLOG > Ambient loop system: why it is a good option for the future

As new energy targets are putting all heating and cooling systems to the test, all actors in the energy industry are currently in search for sustainable, efficient systems. The inclusion of an ambient loop system stands out as a key solution to enhance District Heating networks and guide them towards increased resource optimization.

Learn what exactly is an ambient loop system and the new possibilities opened up by ambient loop district energy.

What is an ambient loop system?

An ambient loop system operates at significantly lower temperatures than traditional communal high temperature heating systems. It is like a district cooling or district heating, but sending the water at medium temperature in the distribution network. Then each building can have its heat pump to use this ambient loop as an unwanted heat source, giving or taking heat from it. That is, evaporate or, if it is summer, condense. It also serves to balance the network if there are different types of consumers, some cold and others hot.

Current successful applications of the ambient loop heat network are being explored in District Energy models, which have been hailed as one of the most efficient and sustainable alternatives to solve heating and cooling needs in cities today.

As such, the ambient loop system complements District Heating solutions, which typically include a centralized model, allowing for increased efficiency by improving its distribution processes. Thanks to the ambient loop, the plant can operate at lower temperatures and using lower flow rates, resulting in less distribution losses between the centralized plant and each individual building.

The ambient loop system, working in conjunction with other efficiency maximizers such as large-scale heat pumps results in unprecedented energy optimizations.

In fact, successful models have been described by Marques et al., including the outstanding example of the London Borough of Islington. After declaring a commitment to guaranteeing carbon neutrality by 2030, a low carbon energy system was devised which combined 3 different district heating networks into a modern 5th Generation District Energy model that would serve around 33,000 citizens.

As a way to optimize efficiency and guarantee energy losses were minimized, an ambient loop system was integrated in the network. As described by the author of the text, this system performed two key measures: 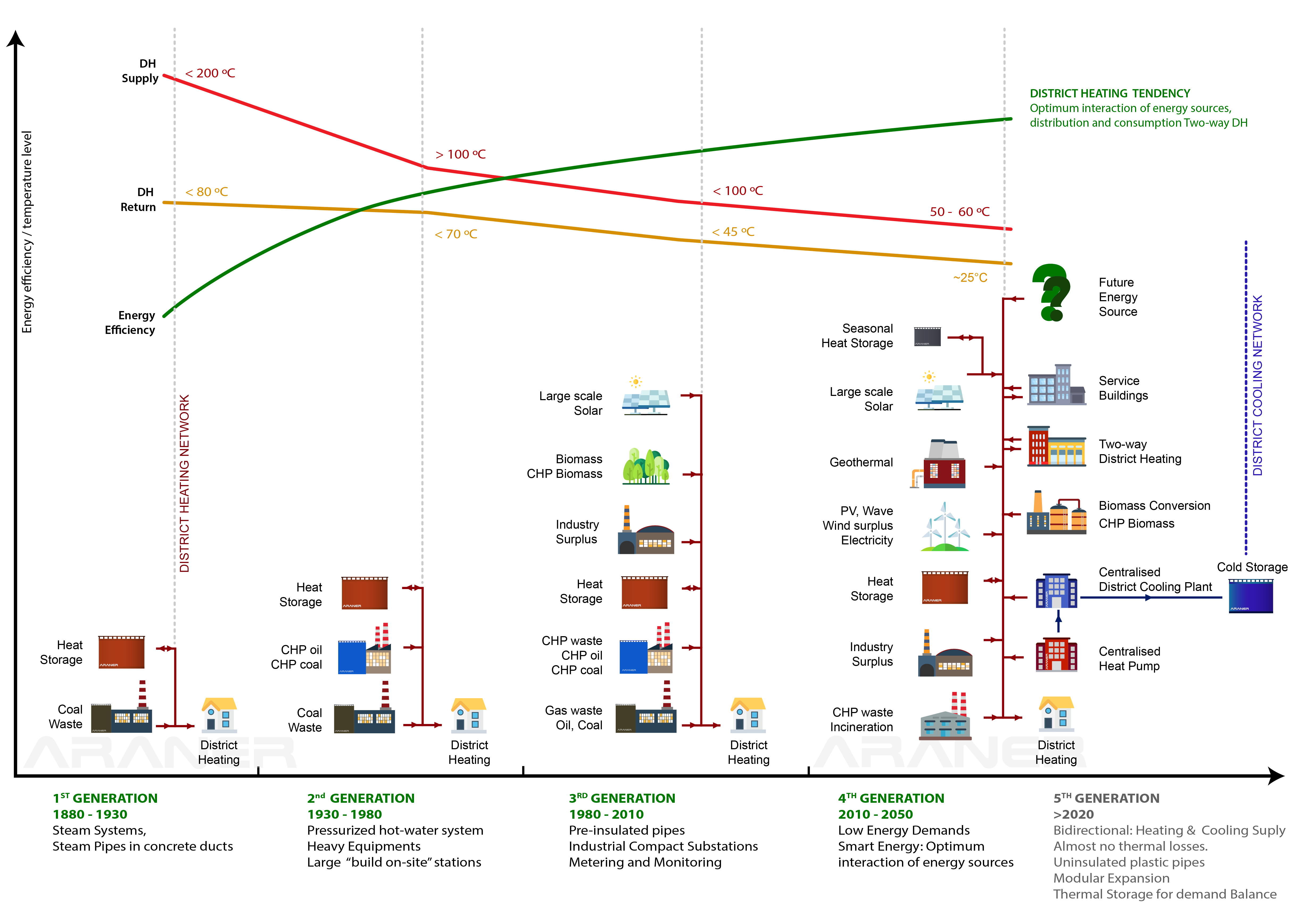 The benefits of an ambient loop system 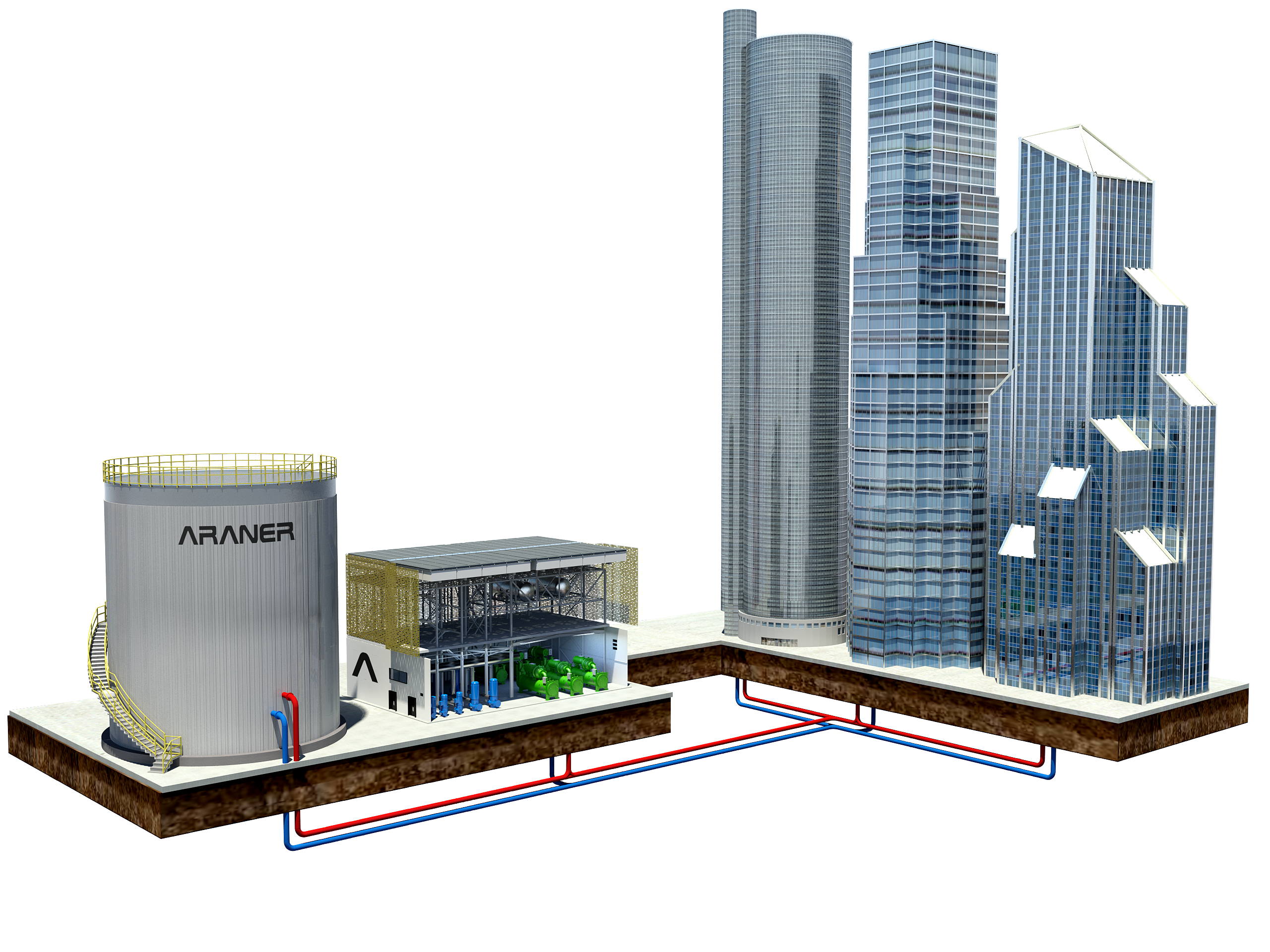 The heating industry is at a crossroads where innovative, efficient solutions are being experimented with in order to limit environmental impacts while providing comfort to citizens.

In such a context, District Heating stands out as one of the key models showing consistent improvements in terms of sustainability but also from an economical point of view.

The key to success in District Heating lies in this model’s capacity for centralization, where a single plant concentrates the whole energy production and then is in charge of redistributing it. Through the employment of the most sustainable energy sources for district heating, it’s possible to switch whole urban centers towards energy efficiencies and carbon-neutral models.

The use of large-scale heat pumps remains a central aspect of these systems’ efficiency: while direct electric heating can reach conversion efficiencies of around 100%, the use of industrial heat pumps can improve this efficiency to up to 250-400%.

The final addition to these exceptional heating models is the inclusion of an ambient loop system, which comes to improve efficiency by creating a smaller temperature gradient that, in turn, guarantees less electricity is required to generate the same heating energy. As we’ve seen in this article, the ambient loop thus solves distribution inefficiencies.

This model, which may also be combined with avant-garde thermal storage systems, provides a hopeful outlook for the District Energy landscape, a system which is being consistently preferred by developers and public institutions as the solution to provide citizens with sustainable heating.

At Araner, we stand at the forefront of energy innovation through our District Energy projects. Working with the most sophisticated tools in the market and applying innovative project management methodologies, we’re able to devise and implement energy systems that match each project’s particular needs.

Want to learn more about District Heating and how it’s helping developers and institutions meet sustainability standards as well as achieving operational efficiencies and economic savings? Download our District Heating Reference book or get in touch with us to speak to our team.

Heat pump design process is performed to obtain the higher efficiency during ...

END_OF_DOCUMENT_TOKEN_TO_BE_REPLACED

The preference of heat pumps in District Energy has to do with many benefits ...

END_OF_DOCUMENT_TOKEN_TO_BE_REPLACED

Geothermal heating: how it works

Geothermal heating stands out today as one of the most sustainable heating ...

END_OF_DOCUMENT_TOKEN_TO_BE_REPLACED

Seawater heat pumps represent one of the leading efforts in achieving maximum ...