The power generation industry is leaning towards combined cycles, which are in high demand for their minimal delivery time and higher efficiency. Enhanced efficiency is beneficial for both countering the greenhouse effect and reducing fuel expenses. One of the most important components in combined cycle and cogeneration power plants is the Heat Recovery Steam Generator (HRSG), which is sandwiched between the gas turbine and the steam turbine. In this article, we highlight the basics of the HRSG and its importance in the industry. Consultants, plant engineers and generally anyone involved in projects will find this information relevant when making key decisions regarding the system.

Where the HRSG is Used 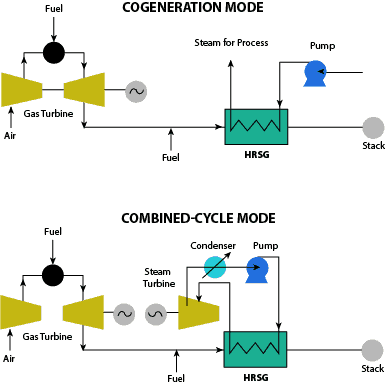 When used in cogeneration, these devices offer environmental and economic benefits. They also enhance overall plant efficiency to as much as 90%. In combined cycles, the HRSG has been seen to enhance efficiency of the combined system to as much as 60%.

Even with the numerous brands of HRSG in the market, the basic design has remained largely the same. The generator is simply a group of tubes placed within an exhaust gas path. The exhaust gases that heat the water-containing tubes are at a temperature of up to 650ºC. Heat absorption from the flue gases is often through convection method, but some designs use convection or radiation. To produce steam, the water is held at a temperature of 200ºC and extremely high pressures. Essentially, the HRSG is composed of several heat exchangers making it a large heat exchanger. The heat exchanger tubes are set in different modules or sections, popularly known as:

Economizer
The function of the economizer is to preheat the feed-water and replace the steam removed. Once the water approaches the boiling point (saturation temperature), it supplied to the steam drum. 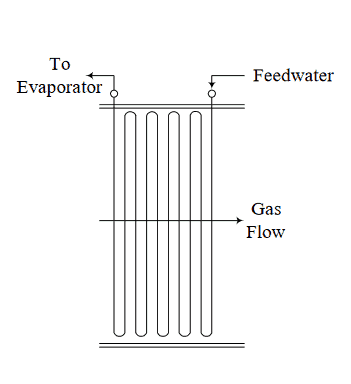 The evaporator refers to the section where the water in the tubes turns into steam from the heat of the gas turbine exhaust.

As shown in the figure above, water/steam moves from the lower drum to the upper drum (steam drum). Steam leaves the upper drum via the steam separating equipment.

When saturated steam leaves the evaporator, it goes to the superheaters/reheaters where it is turned into dry steam. This is important because steam turbines run on dry steam. The movement of the steam through this section is as showed in the diagram below. 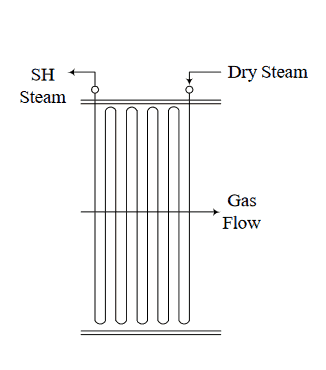 Classification is based on operation, application, or design. This gives several types of these generators as described below.

Depending on design or construction, HRSGs can be either vertical or horizontal. Vertical generators have vertically flowing gas and horizontally placed coils. For horizontal types, gas flows horizontally across vertical coils. While the overall cost of these designs is almost the same, client’s preference may be advised by footprint area, maintenance, structural requirements and other factors that may vary,

The second way of classifying HRSGs is to consider the heat input. Conventionally, HRSGs rely on exhaust heat alone. However, this becomes a challenge at part loads. Ambient conditions also affect turbine performance. That is why supplemental firing is often part of the system.

There is a reason why a lot of focus is on combined cycle and cogeneration power plants- the overall efficiency of the plant is increased in both cases. Whether used for district applications, process heating or electricity production, HRSG offers value for money for the owner. Furthermore, you can always enhance the efficiency of your HRSG in ways that we will explain in an upcoming post. Keep reading our posts.

In climates with high ambient temperatures the power output and efficiency of ...

END_OF_DOCUMENT_TOKEN_TO_BE_REPLACED

Gas turbines are a common sight in distributed energy applications. Driven by ...