TIAC and Power Production in the Middle East

BLOG > TIAC and Power Production in the Middle East

In countries like Iran and Iraq where power consumption is still relatively low, it is expected to continue to grow by about 5,000 MW per year . The power demands in the Middle East are expected to triple by 2050, leaving governments to find ways to meet these increasing demands for power.

Traditional Use of Oil-Fired Power Plants in the Middle East

The Middle East has traditionally used oil-fired power plants due to the availability of oil and affordability in the region. In fact, for many years natural gas was often treated as a waste product and flared off during the oil production process because the cost of development for gas was assumed to be too high . Many countries have turned to other sources of power generation because of the cost and availability of oil in most areas of the world. The Middle East is the world’s largest producer of oil and not only has a ready supply, but there are also subsidies in place which make oil extremely affordable. Currently, about 6.8 million barrels of oil per day are used for power generation worldwide, nearly 35% of that is in the Middle East. However, the increasing demands for oil worldwide have made electricity an unimportant use of oil compared to other possible uses. The continued growth and increasing power demands in the region call for the diversification of the power supply, decreasing the dependence on oil. This diversification will not only make the region less susceptible to volatility in the oil market but make more oil available for export that would have otherwise been consumed by power production.

Volatility in the oil market in recent years, coupled with rising concerns over greenhouse gases has led to a continued rise in the use of natural gas turbines for power production in the Middle East. The use of natural gas has provided a stable, reliable, and efficient power supply while leaving the area's oil available for export to other areas of the world. Gas now contributes up to 60% of the region's power and will continue to provide a significant portion of the areas power supply for the next few decades. The biggest problem is finding ways to continue to keep up with the substantial power demands of the region. 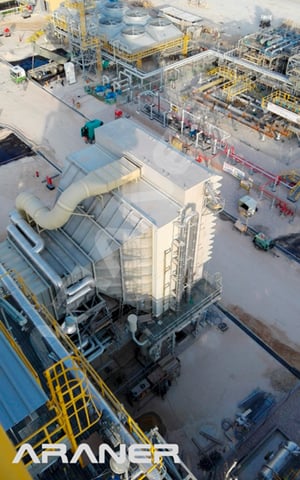 Turbine Inlet Air Cooling (TIAC) is a technology whereby chilled air is provided to the intake of the gas turbine, increasing its efficiency and output. TIAC is becoming more and more common in warm climates, such as the Middle East, where the increased air temperatures substantially decrease the efficiency and power output of turbines. TIAC systems are affordable and can be installed in a fraction of the time that it would take to install another turbine and can increase the output by up to 30%. These systems offer the greatest advantages when temperatures are highest, which also happens to coincide with the high peak demands form cooling in the region. TIAC systems are especially designed for the relative temperature and humidity conditions experienced at the location of the gas turbine plant. The sizing is achieved using historical weather data and allows the system to be optimized for both energy output and cost efficiency. Determining the proper temperature for cooling of the inlet air is also an important factor in TIAC, the typical air temperature for these systems is 15⁰C. However, some power plants will benefit from even cooler air temperatures, while others may not need air quite that cool to see substantial benefits.

TIAC is an option in nearly any gas turbine plant. For new gas turbine plants, a TIAC system can be designed and built to work with the power plant. Existing gas turbine power plants can be retrofit with a TIAC system which will help to increase the efficiency and power output of the facility. TIAC is a great option for plants which need to increase production and efficiency. These systems are also ideal for a situation where the timing or finances may not be right for a full upgrade or when additional power will be needed to meet demands before an upgrade can be completed. TIAC systems can even use waste heat from the turbines to operate the chiller, further increasing the system efficiency. Work with the professionals at ARANER to determine how a TIAC system can boost your turbine output.

It isn’t news that climate change is already affecting every country on the ...

END_OF_DOCUMENT_TOKEN_TO_BE_REPLACED

Turbine Inlet Air Cooling (TIAC) is a fast-growing technology in hot and humid ...