Thermal energy storage (TES) systems have become popular in recent years and have taken many forms over that time. Some forms need energy, others require chemicals, and yet others may entail both. We consider using a Thermal Energy Storage system when a divergence exists between the thermal energy supply and demand, or when using intermittent energy sources.  TES is used to help balance the supply and demand curve discrepancy that exists under normal operations at most direct cooling facilities. When a noticeable difference in supply and demand exists at different points of the day, TES may be an ideal consideration. Using TES allows for storage of energy produced by the direct cooling plant during periods of excess supply for use during periods of excess demand. As the demand for cooling energy levels off, so does the facility's energy usage, and ultimately, its demand on the power grid. With so many TES choices available, where does one look for the optimal system?

How a Stratified Water Tank Works

A stratified water tank is often the best choice for a TES system. These tanks take advantage of a natural stratification process requiring no added energy or harmful chemicals. The less-dense, warm water in the tank rises, and denser chilled water naturally accumulates near the bottom of the tank. Another attractive quality is that stratified water systems are well proven, used in TES for over 30 years. A stratified water tank stores chilled water generated during off-peak periods; often using otherwise wasted cooling energy to recharge the tank with chilled water. This stored cooling energy is then available to augment that generated by the direct cooling system during peak demand.

When to Choose a Thermal Energy Storage System

These systems are customizable for new or existing plants, as well as plants that wish to combine with Turbine Inlet Air Cooling (TIAC); some plants may seek additional capacity during times of peak demand, and TES can help. TES can also be combined with District Cooling, in urban or commercial developments and cooling plants. TES systems allow virtually any plant to take advantage of the natural stratification process and it’s potential to increase the overall efficiency. In particular not requiring added energy and decreasing the power demands during times of potential peak power demand. It is also important to note that much of the stored cooling energy is generated at night when the ambient temperatures are lower, offering a more efficient cooling process. 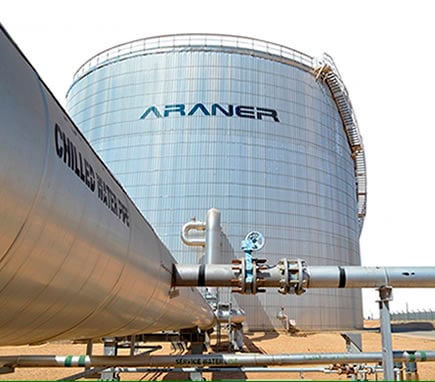 We often think of tanks as being significant, sometimes awkward, cylindrical things; new tank designs allow tanks built to fit almost any desired footprint. ARANER can help you fit a tank into your project space so it may be less evident to the public eye. Thus, making a tank an ideal choice in many projects where aesthetics is a concern. Let us help you decide where you can best fit a tank and incorporate the natural landscape and your tank. The adaptability is just one of many reasons a stratified water tank is an ideal choice . We design each of these energy-efficient tanks to decrease energy losses and meet, often exceed peak cooling demands. The tailor-made design process used for tanks here at ARANER allows us to optimize the tank for each specific project need according to current cooling needs and future projections. There is even the option to bury the tanks in many situations, limiting access and visual obstructions which may otherwise occur.

Intuitive, easy-to-use Human Machine Interfaces were very important to us at ARANER, such that we developed our own flexible control system. The highlights include:

Benefits and Cost Savings with a Thermal Energy Storage System

Installation of a stratified water system may offer capital savings over other Thermal Storage systems, as the stratification process occurs without a need for outside energy. The costs involved with building a stratified water TES system are lower compared to other TES options, the most substantial costs are associated with building the tank. While the cost to build a tank can be appreciable, it may be more affordable than the capital costs associated with the construction and maintenance of other options. There are also no harmful chemicals necessary in a stratified water system, where other systems may require chemicals with potential safety and exposure concerns. Stratified water systems maximize the thermal energy efficiency of the plant processes. Often installed in a plant already using water as a cooling medium, we can always design a stratified water tank to fit the project needs. Financial savings may be realized by the ability to produce cooling energy during off-peak hours for use during times of peak demand, which we know often coincide with peak power grid demands. However, stratified water systems must also consider the mixing that occurs in the tank as water leaves or enters. Such considerations help to ensure the mixing in the tank doesn’t result in the stored water warming above an acceptable temperature earlier than expected. Stratification of the storage tank is an important, but leave this and other precise calculations to the professionals at ARANER. Let us determine your needs today and tell you how installing a TES system can benefit your operation.

A Thermal Energy Storage system has a wide array of uses, whether you need to cut down on peak electricity costs, fit a stratified tank into your current design, or if you want to incorporate it with gas turbines or District Cooling. Plus, ARANER’s own ARAHANG Tank Temperature Monitoring System will help you improve the quality and efficiency of your tank even further! ARANER is a leader in TES, having installed the largest TES system in the world. If you’re looking for someone to pay attention to your project’s unique needs, look no further than ARANER.

END_OF_DOCUMENT_TOKEN_TO_BE_REPLACED

Thermal Energy Storage System: where it can make a difference and why

END_OF_DOCUMENT_TOKEN_TO_BE_REPLACED

In stratified Thermal Energy Storage (TES) tanks, the thermocline refers to the ...