Thermal Energy Storage (TES) systems are accumulators that store the excess of cooling production during periods of low demand to be used in peak periods with high thermal energy needs.

When no TES is installed, the thermal energy produced by the plant has to be adapted to the energy demand fluctuation at every moment. This causes big differences between the working conditions of the plant for two different points of the same day. 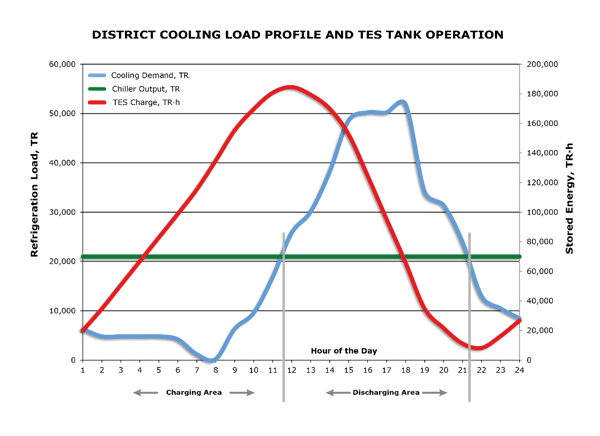 The integration of the TES provides operational flexibility and the plant will be able to operate under constant conditions independently on the energy demand.

The present high-density urban development and the global boost towards sustainable energy solutions have led to a simultaneous increase and fluctuation of district cooling demands where the role of thermal energy storage has become essential. TES systems allow the reduction of the required capacity and cost of the plant, mitigating the effect of variations on consumers.

The stratification in thermal energy storage tanks have been typically accomplished using radial and slotted type diffusers sized for specific design conditions. However, against the current demand fluctuation in both short and medium-term, new district cooling applications require thermal storage systems with flexible performance to satisfy these increasing capacities. In this way, TES system can also represent a back-up to meet any future increase on the cooling demands.

Under these premises, ARANER Research & Development Department has recently developed the novel double crown diffusers using Computational Fluid Dynamics (CFD). CFD represents a key tool in the design, development, and implementation of ARANER technologies by adding a superior understanding and insight into these critical physical phenomena.

Double crown diffusers are the result of a CFD-based optimization process using the last advances in High-Performance Computing (HPC). The new diffuser technology has demonstrate an outstanding double stabilization effect which improve the stratification and Figure of Merit of the TES system. This double effect also enables the operation of the TES tank diffuser system with capacities and flow rates higher that nominal design conditions. In this way, the system is suitable to satisfy current and future increase in the cooling demand of District Cooling systems.

It may interest you: Farah Hospital TES Solution: saving 416,085 USD per year

TES plant: the combination in a district cooling & heating plant

Renewables have a key role to play in the Middle East sustainable energy ...

END_OF_DOCUMENT_TOKEN_TO_BE_REPLACED

In this era of limited resources, energy efficiency and environmental ...

END_OF_DOCUMENT_TOKEN_TO_BE_REPLACED

Have you ever imagined that there was a time when district cooling systems did ...

END_OF_DOCUMENT_TOKEN_TO_BE_REPLACED

Whether we realize it or not, we are in the middle of an energy crisis. After ...