Dependency on fossil fuels is close to coming to an end as global warming effects are noticeable more every year and new forms of energy are adapting to get to the top of the most useful, efficient, greener and effective alternatives. Particularly speaking about cooling systems, District Cooling Plants are gaining relevance as developed nations are aiming their environmental and energetic goals for the next 10 years to match with a sustainable future, making these systems very likely to be implemented. Despite that, some other countries seem not to care about too much. In this article are exposed some possible negative factors and outcomes that are to take into consideration when not implementing a District Cooling Plant as a solution, and relying on a conventional cooling system.

The District Cooling systems regularly implement a Thermal Energy Storage system, this is being done in order to drop the electrical consumption during peak hours, and is being achieved by charging the TES tank during non-peak hours (where we have less cooling demand) and discharging it during peak hours to meet the peak demand. By using this arrangement, the production plant should be smaller and also represent less electrical consumption by not being operated at partial loads, which decreases the efficiency. On the other hand, conventional cooling systems, air handling ventilation and air conditioning equipment (HVAC) units, for instance, are expected to be oversized to meet directly with peak demand and even more to have a reserve margin, that is the reason why it is expected from them to have high electrical consumption.

An important energetic factor is that the great majority of users of individual HVAC units have no idea of how to operate them efficiently, being used at partial loads or even bypassing the expected peak load by using the reserve margin previously mentioned. Another cause of electrical consumption excess besides the low efficiency of this kind of technology is the lack of cleaning and maintenance on the equipment, the fouling is responsible for an increment of approximately 15% of the consumption.

Noise contamination has increased over the years due to a massive increment of people and businesses in big cities, for a building whose primary source of cooling is through conventional cooling systems (HVAC units) the noise contamination factor is going to increase drastically due to a lot of HVAC units are be being used around the building. On the other hand, with the implementation of a District Cooling Plant, is possible to relocate and minimize the noisy equipment in order to reduce the perception of noise within a certain area using sound suppression technology. By restricting this contamination factor to a predetermined area of the development the average noise contamination between buildings drops significantly.

District Cooling can reduce annual CO2 emissions by about 1 ton for every ton of District Cooling refrigeration demand served. Another factor is the very well-known contamination by using ozone-depleting substances as refrigerants like CFC’s (chlorofluorocarbons). Having these types of substances in every unit makes them more likely to get released into the atmosphere due to leaking. By the other hand, on a District Cooling Plant, the refrigerant is being held at the cooling plant and the risk of leaking is minimized. Also, as per its standards and government restrictions in certain countries, environmentally friendly refrigerants are commonly used, for example, the R717 (Ammonia) which is a natural refrigerant and has an ozone depletion potential (ODP) = 0 or the famous R134A with the same ODP level. 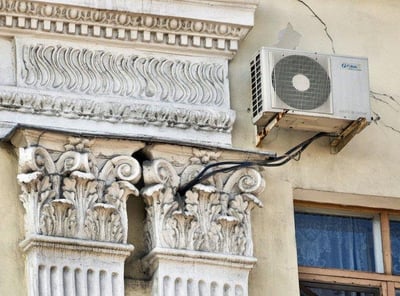 Aesthetical aspect of a new development is key to its attractiveness as it might be for old developments to improve. A new development implementing a centralized cooling solution might get rid of all the HVAC units being part of the façade by having all the cooling generation equipment at the Cooling Plant, giving architects the freedom to create new forms and styles for the façades.

The vast majority of old buildings had incorporated a conventional cooling system with HVAC units which were affecting somehow to its façade. Along with the units, the supports and piping can damage the building by making perforations on the walls or by leaking, making it less attractive and reducing its apparent value.

The technical benefits of Turbine Inlet Air Cooling systems has been widely ...