Industrial Process Refrigeration: An In-Depth Look at Each Component

BLOG > Industrial Process Refrigeration: An In-Depth Look at Each Component

The refrigeration cycle removes unwanted heat from one place and discharges that heat in another area. The process is accomplished, in short, by the pumping of refrigerant through a closed system. This system is composed of several components which enable the process to work. 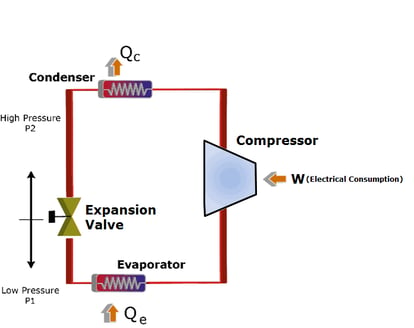 The refrigerant leaving the evaporator returns to the compressor and begins the cycle again. The refrigeration cycle is closed for several reasons, chief among them:

Refrigerants are the liquids used to transfer heat from one area to another in vapor compression refrigeration systems. These refrigerants take on different forms as they change temperature and pressure. When the temperature of the system increases the refrigerant becomes a vapor, and when the pressure of the vapor increases, it becomes hot. When the refrigerant vapor cools, it converts back to its liquid state, and when it loses pressure, it cools further. The cooled refrigerant then reenters the unit to pick up more heat and begin the cycle once again . The refrigerant initially installed in a system will often last its lifetime without ever needing to be replaced or recharged unless something goes wrong, such as a leak in the closed system. The most common refrigerants in industrial refrigeration applications is Ammonia (R717) and R-134a, which is halogen free for safety, health, and environmental friendliness. Ammonia is also one of the oldest refrigerants and has superior heat absorption compared to other refrigerants, but it still has its own set of safety concerns. Other refrigerants are available for applications where ammonia may not be ideal; these might include Carbon Dioxide (R744), Hydrofluorocarbons (HFC), Fluorocarbons (FC), or hydrocarbons. Check out this blog post for further explanation on refrigerants used in Industrial Refrigeration plants or follow up with ARANER for more information to help determine which refrigerant is right for your application. 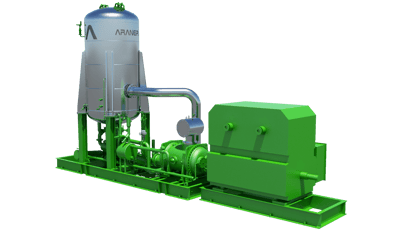 The hot, gaseous refrigerant leaving the compressor enters the coil, known as the condenser, commonly located outdoors. The condenser coil is exposed to a cooling medium which allows the refrigerant to release heat; usually, through the exposure of the coil to the outside air, water, other fluids, or some combination thereof. The heat removed as the refrigerant travels through the condenser results in the refrigerant beginning to condense, return to its liquid state. The condenser is a series of tubes which the refrigerant moves through, hence the term coil. The condenser is often accompanied by a fan which forces air across the surfaces and increases the heat dissipation. The refrigerant leaves the condenser at cooler a temperature, but still under the pressure provided by the compressor. There are three different types of condensers used in industrial refrigeration; these are air-cooled, water-cooled, and evaporative. Air-cooled condensers expose the heated refrigerant to outside air which absorbs heat from the hotter refrigerant, sometimes with the help of a fan or blower to blow air across the condenser surface. A water-cooled condenser generally consists of two sets of tubing in direct contact with each other, one containing the refrigerant and the second cooling water; the refrigerant condenses on the walls of the tubing as the heat transfers to the colder water. An evaporative condenser works much like a cooling tower, where water sprays onto the coil carrying the refrigerant and heat is thus exchanged. A small amount of the water sprayed onto the coil evaporates as a result of the heat contained in the refrigerant and helps to cool the remaining water as it falls to the basin below. The heat-laden, moist air passes through a drift eliminator, to prevent substantial water droplets and mist from escaping, and then the heat is forced out with a fan or blower. More industrial refrigeration applications use evaporative condensers than air- or water-cooled condensers, though specific applications or locations may find that one is a better choice operationally than the others. ARANER can provide you with the information necessary to determine which type of condenser is best suited for your project and location. 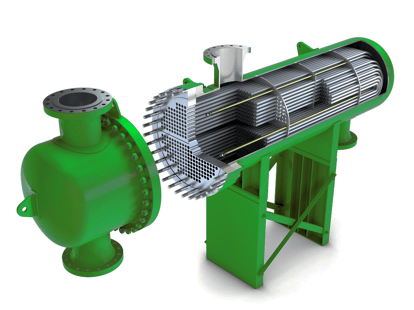 The liquid refrigerant finally enters the evaporator, also known as the indoor coil, where it absorbs the unwanted heat, this is the part of the system which does the actual cooling. The evaporator is very similar to the condenser, except here the refrigerant evaporates, or vaporizes, as heat is absorbed. There are two main categories of evaporators used in industrial refrigeration air coil evaporators and liquid coolers. The type of evaporator selected will depend on your application, what is it that you intend to cool, and how do you want to cool it? In applications where the decision may not be as straight forward, get in touch with ARANER for the details regarding the use of each type of evaporator.

Although the refrigeration cycle works in basically the same manner regardless of the technologies and types of components selected, it is crucial to choose the correct components for a given application. Opting for the right parts can affect various factors, including:

Industrial Refrigeration applications are of the utmost importance, not only for providing direct cooling and TIAC but for numerous industries; including power generation, marine industry, food & beverage, Petrochemical Oil & Gas, Data-processing and District Cooling. The increased reliance of industry on refrigeration calls for more and more unique, individualized systems which perform to strict specifications to meet the needs of the given industry and processes, or the cooling demands of a community. These systems require careful analysis, design, and execution in order to achieve these specifications. ARANER, an exceptional provider of Industrial Refrigeration systems, can guide you through the process from conception to completion. We can design a system that will meet the needs for performance, energy efficiency, and is environmentally friendly regardless of the industry or process in question. Contact us today to learn more.

It is now more than a century since ammonia first played a role in the ...

END_OF_DOCUMENT_TOKEN_TO_BE_REPLACED

Heat exchangers are totally necessary in the refrigeration cycle: as shown in ...

END_OF_DOCUMENT_TOKEN_TO_BE_REPLACED

We frequently use ammonia refrigeration systems for very large cooling ...

END_OF_DOCUMENT_TOKEN_TO_BE_REPLACED

Types of refrigerant used in chillers and refrigeration plants?

There is no absolute answer to the question this question. No refrigerant fits ...