We frequently use ammonia refrigeration systems for very large cooling applications, such as Industrial Refrigeration. Chillers using ammonia are becoming commonplace in green buildings and may be a viable option for District Cooling systems. As refrigerant legislation continues to get tighter, encouraging the use of alternative environmentally-friendly refrigerants, ammonia becomes a more attractive alternative. Ammonia’s global warming potential and ozone depletion potential are both zero.

Ammonia, a naturally-occurring gas composed of hydrogen and nitrogen, belongs to a class of refrigerants considered natural refrigerants; which also includes hydrocarbons, water, air, and carbon dioxide. As their name implies, these are naturally-occurring substances capable of refrigeration; they are all environmentally friendly with negligible global warming potential and ozone depletion potential, with ammonia being harmless for the environment. This is especially true when compared to the synthetic refrigerants that have been popular for the last century.

What is ammonia refrigeration system?

Figure 1: The chemical composition of ammonia

Liquid anhydrous ammonia intended for refrigeration is stored under pressure, usually in a tank. Release of the pressure on the ammonia results in rapid vaporization. The vaporization process results in cooling much as evaporation of water from a surface do, the temperature drops to the normal boiling point of anhydrous ammonia about -33⁰C. In fact, ammonia’s thermodynamic properties allow it to outperform synthetic refrigerants in most applications.

When to choose ammonia refrigeration systems

Ammonia refrigeration is most commonly used in facilities that have large-scale refrigeration systems such as food and beverage manufacturing facilities, cold storage warehouses, combined cycle power plants, and petrochemical facilities. The cost of ammonia is less than that of more traditional hydrofluorocarbon (HFC) refrigerants, in fact, the cost may be as little as one-tenth.

Ammonia has safety implications which require consideration; it is both a flammable and a health hazard. However, in larger facilities with limited exposure and room for dispersion of the zero environmental impact, natural coolant ammonia can be an ideal choice.

Industrial refrigeration systems that use ammonia may require some special planning to help mitigate the potential health and safety hazards. The biggest risk that may occur is an ammonia leak, which is both a health and safety hazard. The most common health concerns with ammonia are skin burns and difficulty breathing, as well as death only in the rarest cases. Leaks most commonly occur during the unloading and loading of ammonia; however, careful and considerate design and diligent training of employees can go a long way towards preventing these leaks.

Many of the materials commonly used in refrigeration systems, copper, for example, are not compatible with ammonia and must be avoided. Ammonia systems require a careful design with a trusted expert like ARANER; using incompatible materials anywhere in the system could cause a potentially deadly leak. 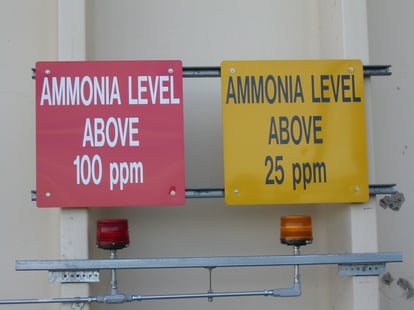 It is worth mention that ammonia also has the benefit of typically being able to use smaller refrigerant piping than other refrigerants, so despite requiring specific materials there may be cost savings for the material.

It is also important that the operators have an emergency response plan in place. The operators and all employees working in the ammonia's vicinity need to be familiar with the emergency response plan. The odor threshold for anhydrous ammonia is 5 to 50 parts per million (ppm) and the maximum recommended exposure is 50 ppm over an 8-hour shift; therefore, the basic rule is when you smell ammonia you should back off and test the need for protective equipment such as respirators and suits. In addition, room air is heavier than ammonia therefore the ammonia will rise.

It is also important to consider any local regulations that may exist around the use or storage of ammonia prior to considering ammonia as a refrigerant. Some countries and local jurisdictions have regulations surrounding the safe handling of ammonia.

Is ammonia refrigeration right for your project?

There are many reasons to consider the ammonia refrigeration for your project, chief among them environmental and energy efficiency. Others are turning to ammonia for peace of mind regarding the regulations surrounding synthetic refrigerants, which seem in constant flux. There are other incentives to consider natural refrigerants: for example, in the EU there is a multi-stakeholder initiative called Refrigerants, Naturally! dedicated to helping those with a stake in the retail industry convert to natural refrigerants. This organization and similar ones may help popularize their use and furthering the technology of these natural refrigerants.

Ammonia has always been a popular choice for Industrial Refrigeration, but now with new regulations and environmental concerns over other refrigerants, there is a renewed focus on ammonia-based systems. If you think ammonia refrigeration might be a fit for your project, contact the professionals at ARANER. We have wide experience with ammonia refrigeration systems, and we can assist you every step of the way from evaluation, to design, to safe operations and maintenance of the completed facility.

It is now more than a century since ammonia first played a role in the ...

END_OF_DOCUMENT_TOKEN_TO_BE_REPLACED

Heat exchangers are totally necessary in the refrigeration cycle: as shown in ...

END_OF_DOCUMENT_TOKEN_TO_BE_REPLACED

What is an ideal industrial refrigerant? There is no absolute answer to this ...

END_OF_DOCUMENT_TOKEN_TO_BE_REPLACED

Industrial Process Refrigeration: An In-Depth Look at Each Component

The refrigeration cycle removes unwanted heat from one place and discharges ...