District Cooling Energy System: All about the cooling process

BLOG > District Cooling Energy System: All about the cooling process

What is a district cooling system?

District Cooling (DC) involves using a central chiller plant to cool water, which is then circulated to multiple buildings to provide cooling. District Energy systems have been around since ancient Rome and are prevalent in the Middle East, across Europe, and in Scandinavian countries. Particularly the implementation of District Cooling systems has become a popular choice in the Middle East as it significantly reduces CO2 emissions, uses less harmful chemicals, and lowers energy use. This region, where Smart Cities, mega projects, and urbanization are highly prevalent, is an especially good location for the use of these unique and effective systems. Discover all the markets where DC can work efficiently.

Components of a District Cooling System 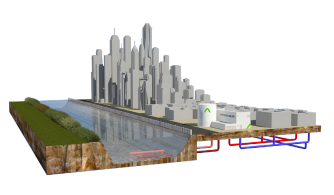 DC involves many different components to make it work. It uses a chiller plant to cool water to around 4-5⁰C, offering a centralized use of refrigerants and heat rejection methods, such as seawater, river water, or even treated sewage effluent. In addition to a chiller, the central plant also houses a water filtration and treatment system, to help to keep the water recirculated through the network conditioned and prevent the fouling of equipment. Finally, the plant also houses equipment to control and monitor the entire system; these controls ensure that the system achieves adequate temperatures, pumps work as anticipated, and opens and closes automated valves in the system.

So how does District Cooling actually work? Let’s break it down. The chilled water is pumped through a network of insulated distribution piping to the various buildings served. Each building has an Energy Transfer Station, which can vary by district or even from building to building, but generally consists of an interface with meters, valves, and pumps. Many buildings have a simple plate heat exchanger that allows the building system to reject heat to the chilled water being circulated by the district. The water returns to the chiller plant at significantly warmer temperatures, about 13-15⁰C, having absorbed the heat from the individual building systems. Return water is filtered, treated, and passed through the chiller where it is again cooled and recirculated to the buildings.

District Cooling offers many benefits over the reduced emissions, reduction in the use of harmful chemicals, and energy use. There is an economy of scale when using District Cooling for a cluster of buildings including increased efficiency, stabilizes electric loads, and reduced costs when compared to cooling buildings individually. The use of District Cooling considerably reduces electrical demands, particularly those which occur during times of peak demand. Since these demands typically coincide with the peak cooling demands, this reduces some of the burdens on the power grid and avoid paying the inflated cost of peak power. 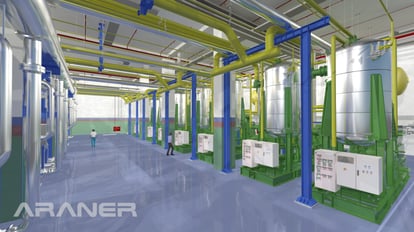 District Cooling systems also reduce the overall operating and maintenance costs. They help to keep power income local as it reduces the need to bring in fuel from other regions. District Cooling designs can significantly improve the aesthetics of the communities they serve; since buildings need considerably less space for mechanics, these systems also offer more efficient use of building space. DC systems can also reduce noise as there is no need for large air handlers and chillers on rooftops. District Cooling energy systems aren't as susceptible to excessive temperatures, impurities in the air, and other harsh operating environments, and it is maintained by highly specialized personnel, which means it offers a longer life span than commercial air conditioning equipment.

District Cooling is a sensible, cost-effective solution for cooling in areas such as the Middle East, Europe, Asia, and South America, among others. For urban areas, it is the perfect solution for some of the most pressing issues of the modern age. It helps to reduce the demand for power and other fuels, offering sustainability. District Cooling has a significant positive environmental effect by reducing CO 2 emissions and pollution. These systems can also reduce electric consumption by an average of 50%, and it is could be 40-60% more efficient than conventional air conditioning. Let ARANER help you determine how a District Cooling system can benefit your project, no matter where you’re located!

Currently, over 50 % of the global population lives in urban areas. There are ...

END_OF_DOCUMENT_TOKEN_TO_BE_REPLACED

What is liquid immersion cooling?

Liquid immersion cooling has gained traction as an efficient alternative to ...