Industrial processes and machines generate such large amounts of heat that continuous dissipation is necessary for efficient operation. The heat must be to the environment. This is through a heat exchange process. That is the basis of the industrial cooling tower technology. It is interesting that despite cooling towers being devices of the 20th century, knowledge about them is actually limited. Some people even believe cooling towers are sources of pollution, yet the only thing they release to the atmosphere is water vapor.

What is a cooling tower?

A cooling tower is a specialized heat exchanger in which air and water are brought into direct contact with each other in order to reduce the water’s temperature from a building. Air comes in from the sides of the tower and passes through the falling water. As the air passes through the water, heat is exchanged and some of the water evaporates. This heat and evaporated water flow out the top of the tower in the form of a fine cloud-like mist. The cooled water is collected at the bottom of the tower and pumped back into the plant or building for reuse.

After many years of development of this technology, cooling towers are available in different types and sizes. Each of these is applicable in a certain load configuration, the reason it is important to outline the options available. Note that despite the different designs, the basic function remains as that of dissipating heat from a building system or a process to the air through evaporation. Here are some categorizations.

The atmospheric cooling towers utilize no mechanical fan to create air flow through the tower, its air is derived from a natural induction flow provided by a pressure spray.

The hybrid draft cooling towers are equiped with mechanical draft fans to augment airflow. Consequenly, they are also referred to us fan-assisted natural draft towers. The intent of their desing is to minimize the horsepower required for the air movement, but to do so with the least possible stack cost impact.

They are often constructed as hyperboloid, doubly-curved concrete shell structures supported on a series of concrete struts. The foundations typically consist of an inclined pond wall forming a circular 'tee' beam with a wide concrete strip.

Counter flow cooling towers have the air passage flowing directly against the flow of the water. As with the cross-flow design, water is allowed to spread out with the help of air inlet louvers. Their bottle like shape characterizes this type of cooling towers.

Considering the shape, there are two types: rectilinear and round mechanical draft. Rectilinear towers are constructed in cellular fashion, increasing linearly to the length and numbers of cells necessary to accomplish a special thermal performance. Instead, there are towers as the name implies, are essentially round in plan configuration, with fans clustered as close practicable around the center point of the tower.

7. Cooling tower based on method of heat transfer

All of the cooling towers described here are evaporative type towers, in that they derive their primary cooling effect from the evaporation that takes place when air and water are brought into the direct contact. At the other end os the spectrum is the Dry tower, where by full utilization of dry surface coil sections, no direct contact (and no evaporation) occurs between air and water. Hence sensible heat transfer cools the water totally.

How an Industrial Cooling Tower Works

Warm water from industrial equipment, commercial ac system or any other heat source enters the tower and spreads evenly at the top. As the water flows down the tower, the equipment fill spreads it over a large area to increase the water-air contact, thus enhancing heat transfer via evaporation. A large volume of air is constantly moving along the fill courtesy of large fans in the tower.

As evaporation takes place, the water loses heat. It eventually enters the tower sump at the bottom. The cool water then goes back to cool the initial heat source and the cycle repeats. For the sake of system dilution, of portion of the system water goes to the drain through a bleed-off valve. The makeup line feeds the cooling tower with fresh water for replenishment. You will not note these processes easily because their simultaneous occurrence creates a continuous loop. The figure below shows the process in a typical cooling tower. 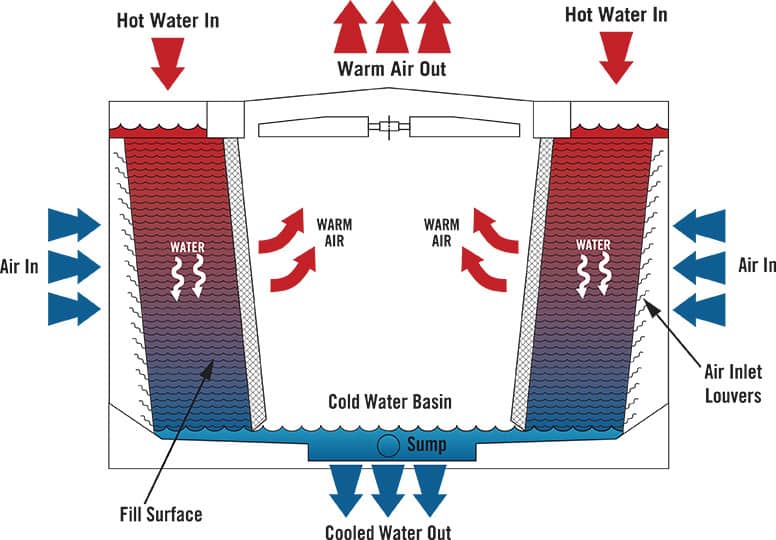 Efficient Operation of the Cooling Tower

Cooling towers may be generally cost-effective for industrial cooling compared to other options, but efficiency challenge can be a letdown. Monitoring the efficiency factor is crucial as it ensures the following:

The Industrial Application of Cooling Towers

The cooling tower system is common in many industries, chief among them being power, commercial, HVAC and industrial. In the industrial setup, the system rejects heat from machinery, heated process material among other sources. Specifically, industrial cooling towers are common in food processing plants, petroleum refineries, natural gas plants and petrochemical plants.

Whenever you mention cooling towers in the context of ARANER cooling solutions, the comparison of these two systems comes up.  Each has its pros and cons, but in dry areas often, air cooled chillers are more preferable. Also when the reliability of the plant is very important and the dependency on water supply must be avoided. This is usually the case for mission critical facilities such as data centers. One of the main differences between the two systems is the absence of a cooling tower in an air-cooled chiller system, bringing benefits such as less maintenance and service requirement 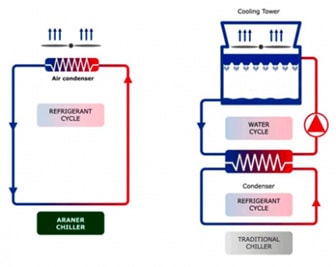 Cooling tower technology is vital in numerous refrigeration systems where they provide process cooling and comfort. However, you may be forced to choose a different cooling solution if upfront cost, space, noise, energy bills and water availability bother you. At ARANER, we appreciate the suitability of cooling towers in certain cases, but we value air-cooled solutions for their ease of operation, ease of setup among other benefits. If you are unsure whether you need a cooling tower installation, contact us for more guidance.

Many regions in the world are grappling with water scarcity. Numerous efforts ...

END_OF_DOCUMENT_TOKEN_TO_BE_REPLACED

The cooling demand in urban areas is increasing because of comfort ...

END_OF_DOCUMENT_TOKEN_TO_BE_REPLACED

We live in a world that is grappling with problems related to a perpetually ...

END_OF_DOCUMENT_TOKEN_TO_BE_REPLACED

The role of a district cooling system is to distribute cooling energy from a ...